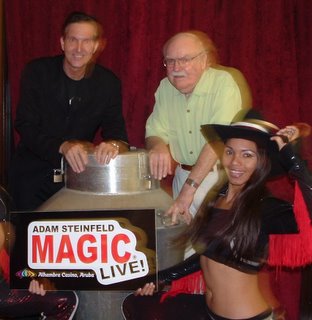 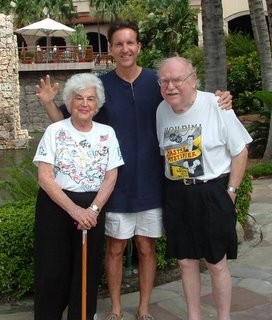 (Left); Helen Radner, (center), Adam Steinfeld & (right) Sid Radner one of the foremost authorities on Houdini in Aruba. ORANJESTAD, Aruba- "anothers Houdini excitement", says Sid Radner, one of the foremost authorities on Houdini, discussing illusionist/magician Adam Steinfeld outside the entrance of Steinfeld's MagicLive! theater at the Alhambra Casino. "I've heard so much praise from friends in Boston & Las Vegas on the Adam Steinfeld MagicLive! show, that I specifically came to Aruba to see for myself". Sid & his lovely wife Helen made a short unexpected visit before Saturday's performance, then plan to see the show live this Wednesday at the Alhambra Casino. "Adam's whole cast & crew made us feel at home, from the MagicLive! dancers Perlita & Ani, to his backstage team very professional, say's Sid Radner, "I hear the show's outstanding, and can't wait to see for myself." (www.MagicOnTheBeach.blogspot.com). Harry Houdini (March 24, 1874 ? October 31, 1926) was the stage name of Ehrich Weiss, one of 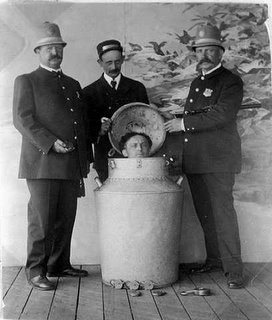 the most famous magicians, escapologists, and stunt performers of all time as well as an investigator of spiritualists. He legally changed his name to "Harry Houdini" in 1913. Sid Radner was Hardeen's protégé. And Hardeen was Houdini's brother. When Houdini one of the greatest escape artists, magician, perfomer passed away at 1:26pm on Halloween in 1926, Hardeen received much of Houdini's magic effects, illusions, etc. When Hardeen passed away, Sid Radner (see photo) received the massive amount of material Houdini had passed on to Hardeen. This included, among other things, the Original Houdini Water Torture Cell escape, scrapbooks, posters etc and for 60 years Radner performed Houdini's illusions & escapes on many well know TV shows such as Steve Allen, Merv Griffin, Dick Cavett to yearly Houdini TV specials with William Shatner, last year on Halloween, a special Houdini auction was held in Las Vegas, and Radner sold all the items including the Water Torture Cell, this event aired recently as a 2 hour TV special on the History Channel. Steinfeld not missing a beat, sent Radner an advanced copy of his just completed manuscript titled Houdini Lives! 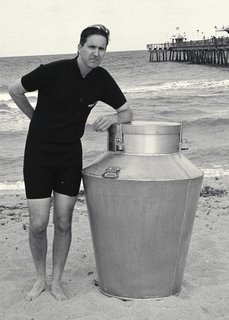 it's a collaborative effort between illusionist, Adam Steinfeld and mystery writer/novelist, Al Blanchard. The Houdini Lives! novel story line; "It's 1966 and Harry Houdini did not die forty years ago, as people thought, but is planning a dramatic comeback." First written as a film-script, this final version of the novel completed in August, 2004. And Sid's comment on the novel, "I enjoyed the book, it's excellent! Reading with an interesting twist - it should be a best seller." (www.HoudiniLives.blogspot.com). 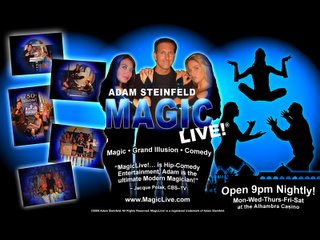 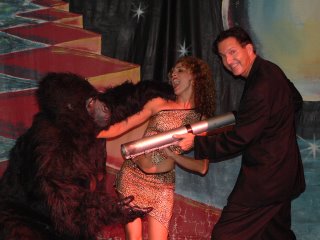 PHOTO: Morris Kong, laughs it up, on stage & on the beach with the lovely Ani, and magician Adam Steinfeld, at Alhambra Casino. Morris Kong... King Kong's Not-So-Famous Brother, signs on with the Adam Steinfeld MagicLive! show. Oranjestad - King Kong's not so famous brother, "Morris Kong" is in town...only at the Adam Steinfeld MagicLive! show, at the Alhamabra Casino, Aruba. Kong, beats his chest, and hams it up for the camera crew, but all in all, Morris said, while sipping on a Banana Dacari, "it's great to be in Aruba, the hot sun, and 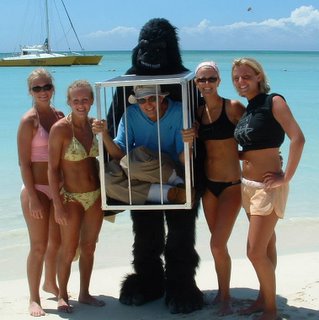 tropical jungle at Arikok National Park, reminds me of my hometown, Bolingo". Morris Kong has had an extensive movie career, he was in the opening circus scene in "Houdini" starring Tony Curtis, he was also a stunt double for Mighty Joe Young, but it wasn't until his first "Three Stooges" short, that he realised his true calling is to make people laugh. "I was the lead Ape, in Planet of the Apes", jokes Morris, plus many Gilligan Island episodes, and most recently in George of the Jungle movie. Says Morris, "I love being in Steinfeld's MagicLive! show, the magic, the excitement, the what's going to happen next atmosphere, plus the illusions are very cool, but nothing compared to the MagicLive! babes, Ani, Perlita & Susanne, especially Susanne, she reminds of of Naomi Watts & Fay Wray". You can see Morris Kong, and many never before seen illusions only at the Adam Steinfeld MagicLive! show, Alhambra Casino, Aruba. Details; Alhambra Casino, Aladdin Theater, 9PM Nightly (Mon.-Wed.-Thurs.-Fri.-Sat.), $29.95 adults, Kids under 15 $19.95. No reservations, open seating on a First-come, First-served basis. Families enter through Divi Village shopping center.
Posted by MAGIC LIVE!® at 9:41 AM