Just in, the all new "I Love MagicLive!" official buttons, a true collectors item, pick one up today at the MagicLive! box office.
Posted by MAGIC LIVE!® at 11:32 AM 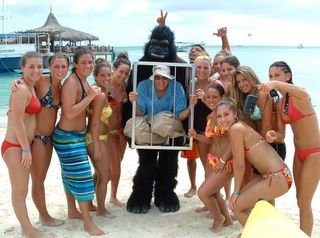 Adam Steinfeld, (inside gorilla cage) laughs it up with his new MagicLive! fans on the beaches of Aruba. Showtime; 9PM nightly, Alhambra Casino, Aruba, Divi Resorts.
Posted by MAGIC LIVE!® at 7:53 AM

Angelique, dancer/magicians assistant in the Adam Steinfeld MagicLive! show at the Alhambra Casino, soaks up the sun at Playa Linda beach resort.
Posted by MAGIC LIVE!® at 7:49 AM 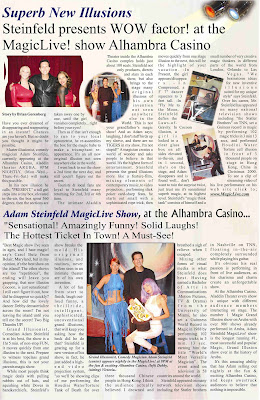 Have you ever dreamed of disappearing and reappearing in an instant? Chances are you haven't. But no doubt you thought it might be possible.

"PRESENT", a tall girl steps into a tiny box, elevated the-air, the box spins 360 degrees, then the sections taken away one by one, until the girl vanishes completely... right before your eyes! Then if that isn't enough to run to your local optometrist, he re-assembles the box for the magicbabe to make a triumphant re-appearance. It's an all new original illusion not seen anywhere else in the world. I went back to see the show a 2nd time the next day, and still couldn't figure out the secret.

Tourists & local fans are loyal to Steinfeld many returning 2nd, 3rd, or 4th time. The show is in the intimate Aladdin Theater inside the Alhambra Casino, theater holds just about 100 seats, is a remarkable night of amazing illusion & comedy, Steinfeld not only produces, directs and stars in each show, but also brings to the stage many original inventive illusions of his own invention not seen anywhere else in the world. This is not your grandfathers magic show! And as Adam says; laughing, "there are no TIGERS in my show, I'm not stupid!"

A magician creates a world of wonder and asks people to believe in that world, it's the highest form of entertainment. Steinfeld presents the grand illusions more like a feature-film, mixing elements of contemporary music, to video projection... performing slick poker card- sharp feats, he starts out small with a sophisticated rope trick, then moves quickly from one stage illusion to the next, this will be the highlight of your vacation.

-In Present, the girl appears/ disappears.

-In "Fly Me to the Moon, Steinfeld defies the Laws-of- Gravity.

In Cocoon illusion, a girl is locked in clear glass box on all sides elevated in the air, and in 1 second, she's on the stage, and Adam disappears and is found well......don't want to ruin the surprise twist, just trust me it's sensational superb magic, at it's highest level.

Steinfeld's "magic think tank" consists of himself and a small number of very creative magic thinkers in different parts of the world from England, Florida to Las Vegas, "we brainstorm ideas over the internet each week for new inventive illusions suited for my unique style" says Steinfeld.

Over his career, Adam has appeared on many national television shows including "the Statlers Brothers" on TNN, Set a Guinness record in magic by performing 102 magic tricks in 3 min 13 secs, and performed Houdini Water Torture cell illusion in front of 3 thousand people on stage in HongKong, China in Christmas 2000, you can see a clip of streaming video of the live performance on his web site click to; 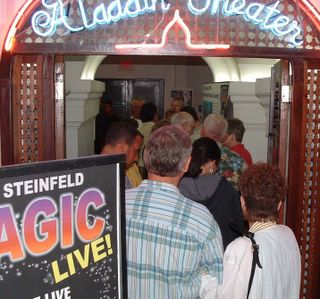 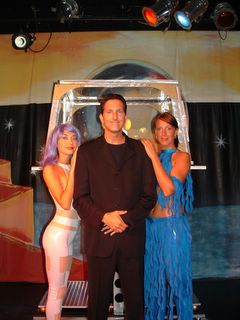 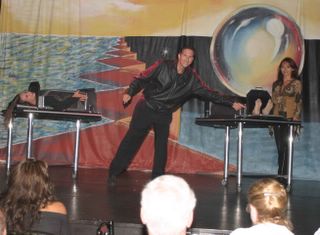 Steinfeld Wows! audience in Human Diffusion illusion.
Posted by MAGIC LIVE!® at 9:09 AM

Hi MagicLive! friends, and welcome to the first edition of Magic On The Beach, a new kind of blogger to celebrate the big success of the Adam Steinfeld MagicLive! show, located inside the fun & exciting Alhambra Casino on the fantastic island of Aruba. Check out our new poster below, it's a mixture of 20 different photos over years, mixing past & present magicbabe dancers and illusions.
Posted by MAGIC LIVE!® at 7:09 PM 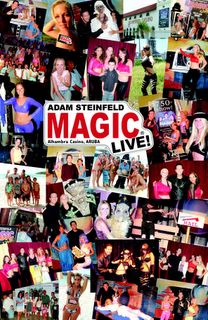 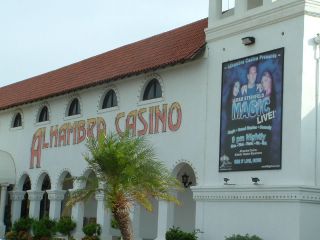 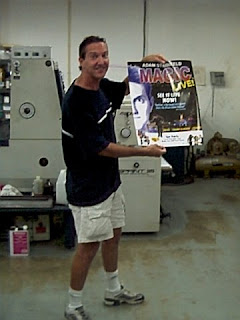 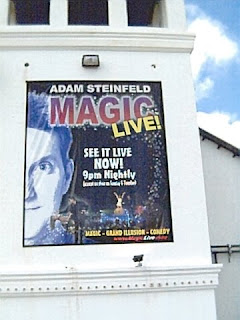