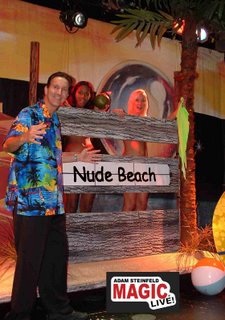 Nothing UP MY Sleeve! at the ADAM STEINFELD MAGICLIVE! show, Aladdin Theater showroom, Alhambra Casino.

ORANJESTAND, Aruba - Illusionist, magician/comedian ADAM STEINFELD breaks new ground with an amazing all new original illusion of his own invention, he calls; THE BEACH. "It's been two years in development said Steinfeld after the show at the Alhambra Casino, on the tropical island of Aruba, but I think we really pulled it off this time", based on an original idea by Steinfeld, that mixes girls in bikini's in a beach setting... this is not your grandfathers magic show, it's nothing what you thought a magician is, no boxes, no swords sliced through the girl and especially no tigers!

Steinfeld takes the audience to-the-beach with the most hilarious, sexy, yet puzzeling conundrum ever to be presented on a single stage. I went back to see the show a 2nd time the next day, and still couldn't figure out the secret.

Tourists & local fans are loyal to Steinfeld many returning for a 2nd, 3rd or 4th time.You'll see all this and much much more at; the Adam Steinfeld MagicLive! show, Alhambra Casino, Aruba nightly 9PM nightly. More info at; http://www.magiclive.com/


MagicLive! is a registered trademark of Adam Steinfeld.
Posted by MAGIC LIVE!® at 10:15 AM 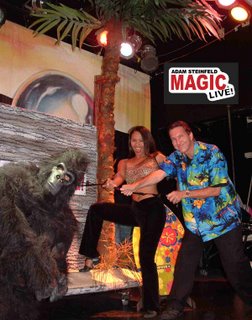 PHOTO: Morris Kong (gorilla), laughs it up, on stage & on the beach with the lovely Perlita, and illusionist, comedian/magician Adam Steinfeld, at Alhambra Casino. King Kongs Not-So-Famous Brother, signs with the Adam Steinfeld MagicLive! show. Oranjestad - King Kong's not so famous brother, "Morris Kong" is in town...only at the Adam Steinfeld MagicLive! show, at the Alhamabra Casino, Aruba. Kong, beats his chest, and hams it up for the camera crew, but all in all, Morris said, while sipping on a Banana Dacari, "it's great to be in Aruba, the hot sun, and tropical jungle at Arikok National Park, reminds me of my hometown, Brooklyn, I mean...Bolingo. Morris Kong has had an extensive movie career, he was in the opening circus scene in classic movie, Houdini starring Tony Curtis, and a stunt double for Mighty Joe Young, but it wasn't until his first 3 Stooges short, that he realized his true calling.... to make people laugh. "I was the lead Ape, in Planet of the Apes", jokes Morris, plus many Gilligan Island episodes, and most recently in George of the Jungle movie. Says Morris, "I love being in Steinfeld's MagicLive! show, the magic, the what's going to happen next atmosphere, plus the illusions are very cool, but nothing compared to the MagicLive! babes, Yvette, Perlita & Susanne, especially Susanne, she reminds of of Naomi Watts & Fay Wray". You can see Morris Kong, and many never before seen illusions only at the Adam Steinfeld MagicLive! show, Alhambra Casino, Aruba. Details; Alhambra Casino Aruba, Aladdin Theater, 9PM Nightly (Mon.-Wed.-Thurs.-Fri.-Sat.), $29.95 adults, Kids under 15 $19.95. No reservations, open seating on a First-come, First-served basis. Families enter through Divi Village shopping center. MagicLive! is a registered trademark of Adam Steinfeld.
Posted by MAGIC LIVE!® at 9:05 PM 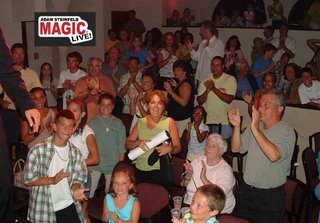 Another standing ovatation at the Adam Steinfeld MAGICLIVE! show in ARUBA, an amazing night of grand illusions, superb magic at it's highest level...forget about all the other magic shows you've ever seen, and the time your grandfather pulled a quarter out of your ear, and bring the entire family to the most extraordinary unique magic, grand illusions show ever on this or any other stage in the world. Expect lots of surprises, and many new never before seen original top-class grand illusions invented by Steinfeld. MagicLive! is a registered trademark of Adam Steinfeld.
Posted by MAGIC LIVE!® at 11:33 AM